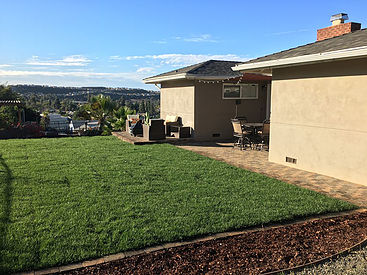 Sod Guys saved me! After slowly working on smaller backyard projects (paver patio, drainage, etc.) for almost a year, my wife finally had enough and gave me a deadline: Finish the dirt backyard within a month so that she could host my son’s 1st b-day party there.

Enter Michael and his team. I called him on a Monday morning and by noon, he was at my house taking measurements for a sprinkler and sod install job. Did I also mention that he gave me a rough quote on the phone before that? On Wednesday, his recommended plumber came and ran a water line to the backyard. Sprinklers and sod for scheduled for that upcoming Monday.

On Thursday, Michael texted me and said that his other jobs were ahead of schedule and that they could start and finish the sprinkler job on Saturday with the sod install still on Monday. No problem! He and his team came in early Saturday morning and were done by the early afternoon. When Monday came, they took another half day to roll out the sod and tune the sprinklers. When the boss and his crew are laughing, joking, and generally having a good time while doing their work you know you have a good team!

Michael also followed up with me a few days and even weeks after the install. He sent a guy back to replace a manfuntioning sprinkler head and replaced a piece of sod that was wilting due to missing sprinkler coverage. Completely satisfied with his work and support after the fact.

Now I have a finished backyard and an even happier wife! Thanks Sod Guys!